September 11, 2017
Logic says that the managers and directors most aligned to maximising shareholder value will be those with a considerable portion of their wealth tied up in equity in the business they are involved in.


This is the 2nd grab from a brief paper Equitable Investors put together, "Seeking Advantage - Focusing on the Underlying Drivers of Excess Returns Most Evident in Smaller Companies to Optimise Investment Portfolios for Return and Risk". You can find the first grab from that paper here. And you can find the paper itself at www.equitableinvestors.com.au.

A recently published research paper reconfirmed historical studies that also showed managerial ownership leads to an improved performance. This January 2017 paper, Managerial Ownership, Board of Directors, Equity-based Compensation and Firm Performance: A Comparative Study Between France and the United States, by Bouras & Gallali, found that performance reached a maximum level at a managerial ownership level of 21.4% in the US.

The flip-side, however, is that the report found that as managerial ownership continues past this point, entrenchment appears to become an issue.

A study this author undertook in October 2012, for Investorfirst Securities, identified 38 ASX-listed companies with a CEO entitled to a larger annual dividend than their reported remuneration. Those 38 companies had achieved an average total return of 72% over the previous three years (and a median of 40%), compared to a 5.2% return for the S&P/ASX All Ordinaries Index. Only eight of the 38 had suffered negative returns in that time. The table below (lifted from that 2012 study) sets out the ten CEOs identified in that study with the highest dividend entitlement as a percentage of their executive remuneration. 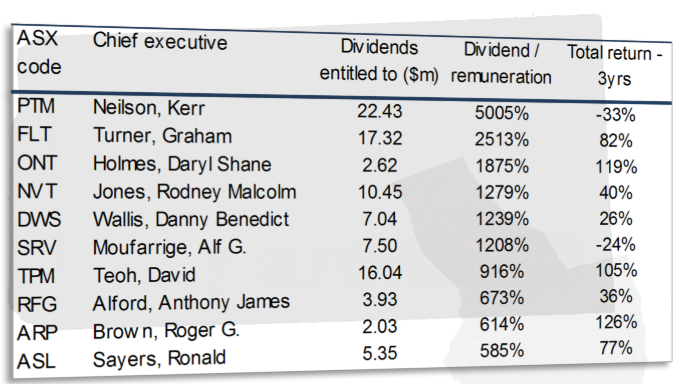 For CEOs to hold enough equity to earn strong dividend yields, there is a strong likelihood that they were involved in the establishment or earlier growth stages of the business. And for that reason, small and mid caps are the companies where such CEOs are most likely to be found. The average market capitalisation of the 38 companies identified was $865m at the time and the median was $222m.

Nearly five years later we have checked how the stocks in Figure 6 have performed. The results, set out in Figure 6, are consistent with our “Alignment of Interest” thesis: 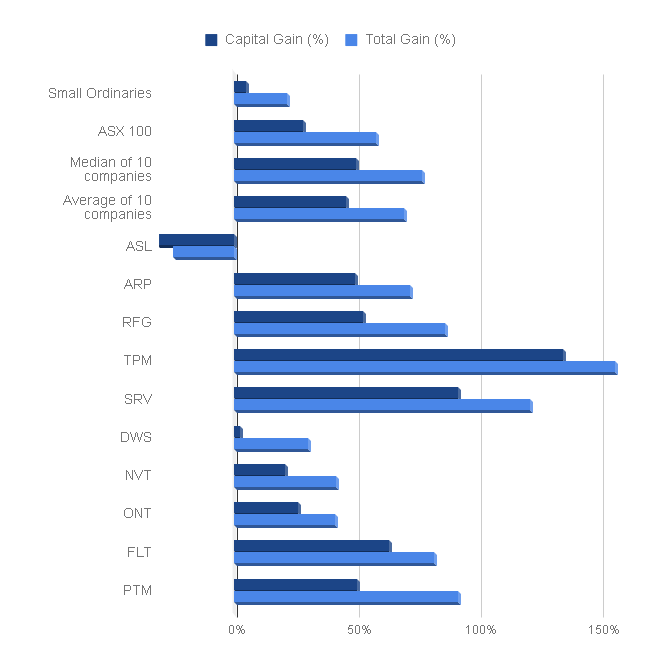