Our analysis indicates that August was a month of extremes on the ASX with a renewed focus on price at one end of the spectrum but also a strong element of speculation at the other. This is probably a good environment for micro caps - some of whom have been lowly priced compared to metrics for larger businesses in their sectors; and others that are at an early stage and require "animal spirits" to drive their share prices.

The big guns on the ASX, as measured by the S&P/ASX 100, pushed through for a 1.9% gain in August, against a backdrop of dividend cuts and with considerable correlation for many of these large businesses with the weak domestic economy. The S&P/ASX Small Industrials was up 9.5%. Our Dragonfly Fund, which is heavily weighted to micro caps, looks like it had its best ever single month return (for the second consecutive month) - but we're still finalising the figures.

2.5 stocks up for every one that declined

We track a pool of over 600 ASX-listed companies that had market caps of less than $5 billion at the start of the year and were revenue generative. Our “FIT” (Financials, Industrials & Technology) universe measures the share price performance of companies that meet the following criteria:

For this group of stocks we found that in August 2020:

Share price moves need to be used as a proxy for the impact of earnings results released in August given the majority of these smaller companies do not have analyst coverage - so we can't review the announced results relative to consensus forecasts and we can't consider analysts' earnings revisions. But undoubtedly the share price moves also reflect changes in overall market sentiment.

For the minority of companies in this universe that do have analyst coverage, there were slightly more downgrades than upgrades to both revenue and EPS expectations - but it was pretty evenly balanced.

What's interesting about the price movements in August is that there does seem to have been a shift in the market back towards focusing on price rather than just momentum.
We separate this universe into thirds ranked by PE, EV/EBITDA and EV/Revenue, using their historical financials. In each of those categories in August, the average return was greatest for the cheapest third.
But then again - if you take into account those stocks with negative earnings, they actually moved even higher!
Figure 1: August 2020 price returns for Equitable Investors' "FIT" universe by value ranking 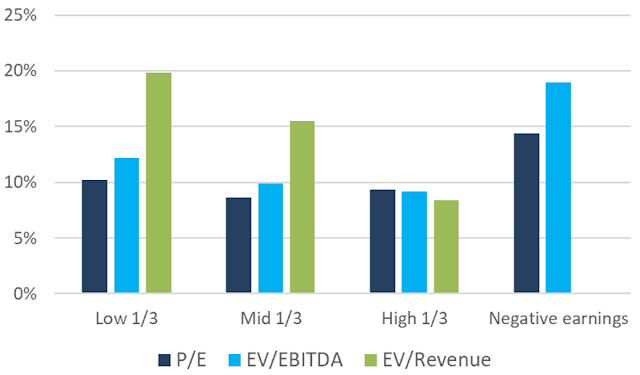 Source: Sentieo, Equitable Investors
Tough to go wrong on a sector basis
It was only the Utilities and Energy sectors that averaged a decline in August. IT was predictably at the forefront but so was the Consumer Discretionary sector, with Pointsbet (PBH) up 118%, Corporate Travel (CTD) up 83% and iSelect (ISU - a holding of Equitable Investors Dragonfly Fund) up 71%.
Figure 2: August 2020 price returns for Equitable Investors' "FIT" universe by sector average 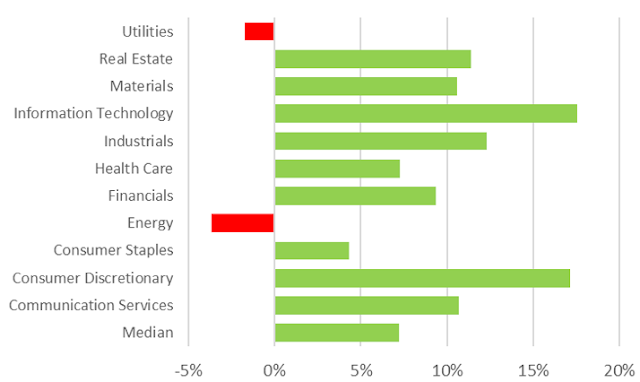