Our May 2021 update for Equitable Investors Dragonfly Fund includes commentary on inflation and the cost of capital.

If it isn’t about “meme” stocks, most of the market commentary and chatter at the time of writing this update is about inflation. The US Consumer Price Index jumped 5% in May 2021 from a year ago, the largest annual gain since August 2008 according to Bloomberg. The debate continues over whether this increase in inflation  is “transitory” and reflective of the re-opening of economies OR whether it reflects a more permanent shift. The argument matters not just because central banks will try to use interest rates to control inflation if it is persistently higher but because the return investors will require will need to increase for their capital to maintain its relative buying power.

We included in the May 2021 update a chart published by Sanford Bernstein that we've used in the part when discussing with clients the impact of higher inflation and higher interest rates. The chart (Figure 1 below) demonstrated how variation in the Weighted Average Cost of Capital (WACC) used to value a company's future cash flows has a material impact on the present value of high growth companies. That's because most of the value priced in by investors in these companies is based on cashflows not expected to be delivered for many years.

In Figure 1, the majority of value is attributed to the "terminal value", which catches all cash flow expected to flow AFTER the first ten years of projections. The lower the WACC, the higher the valuation of the company today as the terminal value rises. 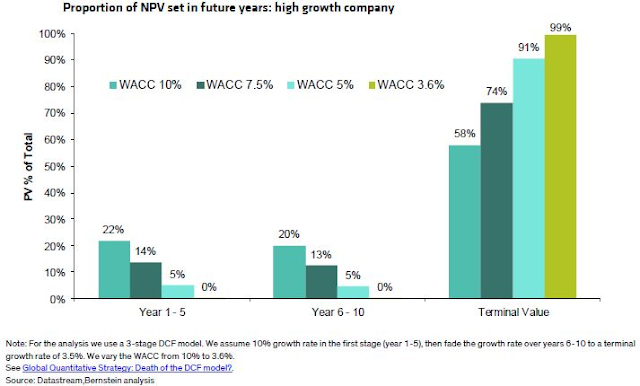 We also ran a similar analysis for an ASX-listed company, set out in Figure 2, with high growth expectations, using consensus estimates for the first three years then a 10% annual growth rate for two years that then faded to 3.5% over ten years. 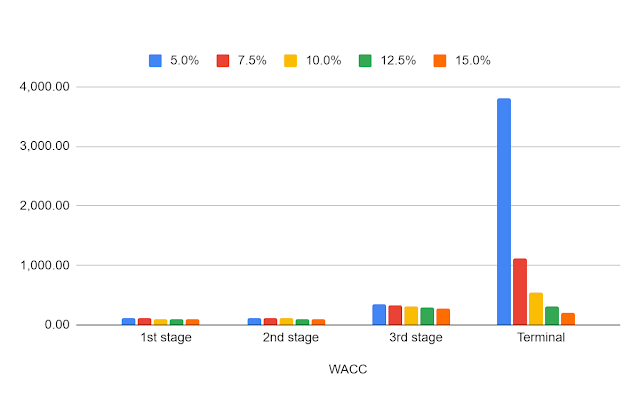 But Figure 3 is perhaps the starkest graphical presentation of the sensitivity of the overall net present value of a high growth firm to changes in cost of capital.

How does this compare with a company that doesn't have high growth expectations? Figure 4 compares the sensitivity of NPV for the high-growth company from Figures 2 and 3 with the same changes in WACC for a company that has lower consensus growth estimates in years 1 to 3 and a decline in growth thereafter from 3.5% to 0%.

The terminal value only represents 60% of the NPV of the lower-growth company at a WACC of 5% (compared to 87% in the case of the high growth company).

This lower-growth company, it is important to note, is still expected to grow its EBITDA by 15% a year between years one and three, compared to 34% for the high-growth company.

Where are we at on the cost of capital curve at the moment? The Australian proxy for the "risk free" rate by which the required return on all other capital is benchmarked is the Australian Government's 10 year bond yield, which is currently 1.59% after spending much of CY2020 below 1%. An estimate of the additional premium for equites is ~5%, implying that a company with no debt has a cost of capital of 6.6%.