The failed online video review business finally released its accounts for the six months ended December 31 and they showed operating cash flows were sharply negative to the tune of $9.4m (Figure 1, below).

That's completely at odds with the positive $16.8m operating cashflow reported for the same period ("Year to date" column in Figure 2, below) when Big Un announced them six months ago. 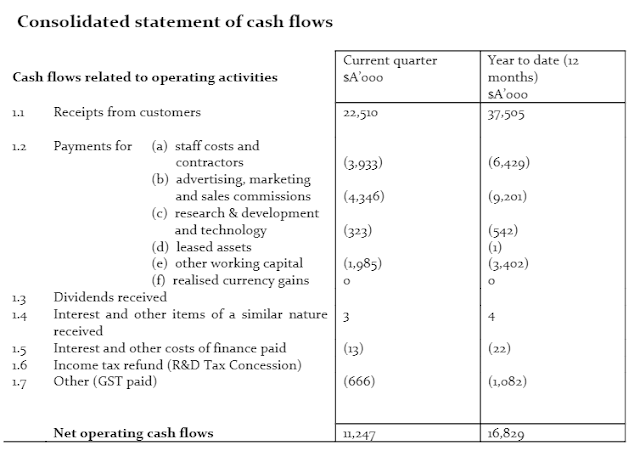 What's the difference? In the newly released half year accounts, Big Un's accountants have adopted an accounting standard under which "no  revenue  is  recognised  on  receipt  of  monies  from  sponsors,  as  the sponsor  does  not  meet  the  definition  of  a  customer...  Advances  from a sponsor  are treated as a financial liability on the balance sheet rather than revenue."

Notes to the accounts discuss the fact that on 8 February 2018 the company was subjected to media scrutiny regarding a "sponsor", First Class Securities Pty Ltd, resulting in questioning of the company's accounting policies.

While not detailed in the accounts, Big Un did disclose in February, for the first time, that First Class was effectively offering financing of customer payments that allowed Big Un to receive cash immediately even though the customer may not accept the promotional video Big Un was producing for them (in which case Big Un would have to find a new customer or repay First Class).

One of my favourite articles this year, from the AFR's Jonathan Shapiro, goes into far more detail here: https://www.afr.com/business/inside-the-boiler-room-that-is-big-un-limited-20180301-h0wv2t