December 09, 2017
Warren Buffett says, “I just sit in my office and read all day.” Not everyone can afford to devote themselves to reading to that extent so here's a shortcut - the headlines that caught our eye this past week and compelled us to click and read.

Pool of negative yielding bonds tops $11tn in November | FT
More than $11tn of sovereign and corporate bonds traded with a yield below zero at the end of November, despite quickening global growth and a view among investors that central banks will begin to remove their extraordinary accommodation.

How To Read Financial News | Collaborative Fund
October 27th, 1929. It’s the day before the Great Depression begins. One of the most important days in market history. Let’s go back in a time. What would you find? Dig through the New York Times that day, and the entirety of stock market coverage is summarized on one page, a third of which is a Chanel shoe ad.

Companies shunned all-stock mergers in 2017 | FT
The proportion of merger and acquisition activity involving all-share deals has dropped to a record low this year, as access to cheap cash and doubts over US equity market valuations complicate what can already be a fraught option for dealmakers.

Australia isn’t dominated by big businesses that gouge customers | The Conversation
... the latest report from the Grattan Institute finds claims about Australia being dominated by oligopolies are overblown. Only about 15% of the economy is dominated by large firms.

In the field of play

Battle of the funds heats up as Team Integral launches war of words | Stockhead
Capitol Health’s hostile takeover bid for Integral Diagnostics — which would create one of Australia’s biggest diagnostic imaging groups — is shaping up as a battle of the funds.

Downvotes galore as shareholders lose patience with explorers | Stockhead
Shareholders are getting tough on explorers and miners, with several receiving first strikes against their remuneration reports and directors getting the chop in the latest round of annual general meetings.

The smartest bitcoin trade in town? | FT
If you’re gunning to be the only entity in town prepared to sell bitcoin futures, it would be in your interests to start “pre-hedging” physical bitcoin as soon as possible with a view to locking in a risk-free basis return once the ability to sell futures on a regulated venue becomes possible.

Bitcoin is Hot, But Good Luck Using It | Bloomberg
Bitcoin seems to be everywhere these days. Finding a place to spend it is another matter entirely.That flies in the face of popular perception that businesses are trumpeting the acceptance of the digital currency as a form of payment. Looking for a mate? OkCupid stopped accepting cryptopayments a year ago.

Bitcoin, Ignorance, and You | WSJ
The gravity-defying rise of bitcoin has been drawing in new money from people who appear to know nothing about the cryptocurrency other than the fact that its price has gone up a lot in a hurry.

Apparently , Confucius didn’t say “One Picture is Worth Ten Thousand Words” after all. It was an advertisement in a 1920s trade journal for the use of images in advertisements on the sides of streetcars. Even without the credibility of Confucius behind it, we think this saying has merit. Each month we share a few charts or images we consider noteworthy.  Lets start with Buy Now Pay Later (BNPL - and you can watch Equitable Investors' Martin Pretty and Cyan's Dean Fergie recent chat about BNPL  here ) - with Wilsons running the comps on the eight ASX listings in the space (how many do we need?). While the Robinhood investors remain in focus, data on US equities ownership shows those aged under 54 own less of the equity "pie" now than in past decades. If Deutsche Bank projections on COVID-19 immunity in wealthy nations prove correct, herd immunity is on its way in 2021. Morgan Stanley says global GDP will be back on trend in the next six months. And globally fund manage
Read more 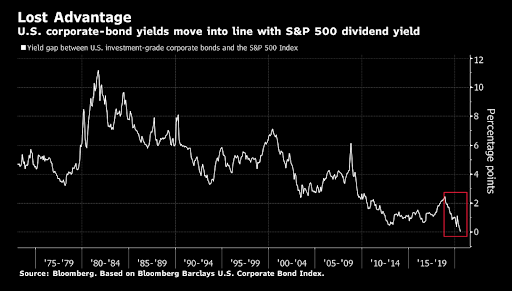 Apparently , Confucius didn’t say “One Picture is Worth Ten Thousand Words” after all. It was an advertisement in a 1920s trade journal for the use of images in advertisements on the sides of streetcars. Even without the credibility of Confucius behind it, we think this saying has merit. Each month we share a few charts or images we consider noteworthy.  Focusing on drivers of stock valuation, we see corporate bond yields converge with equity yields in the US, as strategist Christophe Barraud highlighted. Verdad studies the impact on "terminal" valuation of long-term growth and discount rate assumptions (no surprises that low interest rates and optimistic growth rates boost "growth" stocks); while George Mason University identified significant sectorial shifts in beta (the measure of the extent to which a stock's moves magnify market moves). Listed private equity in the US is still recovering from the March 2020 sell-off, while Cannacord highlights ASX media s
Read more