Showing posts from August, 2019
Show All

Australian investors have done well out of sleep with ResMed’s market cap multiplying nearly 19x since 2002. Equitable Investors Dragonfly Fund’s best performed investment (at the time this was written), Rhinomed (RNO) , has a different angle on sleep. So does a newer investment for the Fund, Oventus Medical (OVN) . Both were contributors to the Fund’s positive performance in July. RNO has a consumable nasal insert sold as a solution for mild sleep apnea but is also now emerging as a drug delivery platform. During July, RNO (a) released data showing its “Mute” nasal insert is the fastest growing product in its category in US drugstores; (b) received a CE Mark registering its “Pronto” nasal insert that releases vapour (essential oils) for Europe (having already received US FDA and Australian TGA approval); and (c) released its June quarter cashflow showing cash receipts up 150% year-on-year to $1.5m. As Figure 1 below shows, RNO has emerged as a rapidly growing product in US drug store
Read more 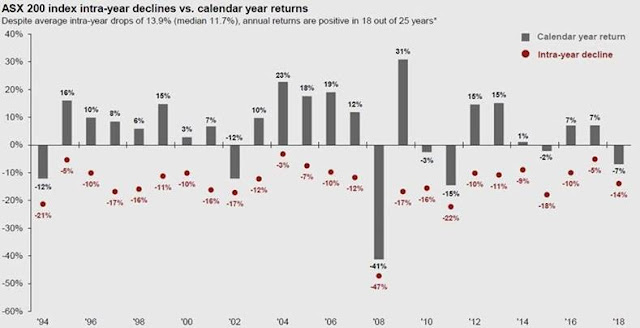 Apparently , Confucius didn’t say “One Picture Worth Ten Thousand Words” after all. It was an advertisement in a 1920s trade journal for the use of images in advertisements on the sides of streetcars. Even without the credibility of Confucius behind it, we think this saying has merit. Each month we share a few charts or images we consider noteworthy. Aussie tech stocks are approaching dot.com pricing according to Schroders, while at the same time Argentina's sharemarket this week experienced the second biggest one-day plunge since 1950 (out of 94 stock exchange indices tracked by Bloomberg). Volatility has ramped up in mainstream Aussie and US equities and Evans & Partners have chimed in to remind us that corrections are normal with an average intra-year drop of 13.9% for the S&P/ASX 200. Meanwhile, Goldman Sachs explores the new world where negative interest rates are normal. JP Morgan then looks at what has happened to equities in markets where bond yields fall below 1%
Read more
More posts